I've been posting more on my other LJ lately, but I feel guilty its been SOOO LONG since I last updated this one.

Stuff is going well. I passed my 3-day review at work so I am more or less a permanent employee as long as I don't screw up too badly before April. I should be getting a raise in April so as long as that happens things should be looking up.

Nando and I have our 5 year annivery next month and are going to go to Disneyland in 2 weeks. I like going in early December before all the kids get out of school because its way less crowded then.

I've also been really into animal rights groups lately. I've always loved animals but have been doing more about it lately by donating to some animal charities. When I first heard about PETA I thought they seemed a bit extreme but after looking into them some I feel like I really agree with most of their view points. Someone needs to be fighting for animals and bringing their abuse to the public eye. I think companies get away so much cruelty to animals (animal testing, horrible conditions in the meat industry, etc) because its done behind closed doors.

I've been thinking about starting an online shop on Etsy. My idea is to try selling craft supplies, specifically stuff realted to decoden. If you don't know what decoden is there is an LJ community for it: http://community.livejournal.com/deco_den/profile

So I was going to try selling resin cabochons, polymer clay decorations, "whip cream" clay, rhinestones and probably a few other things. I've been researching wholesalers but have had some difficulty finding ones that don't require you to order a gigantic quantity. I don't actually see myself making that much but I still think it might be fun :)

Strangely I only recently started really looking around Etsy but wow there is a lot of awesome stuff there!

Ok so I think this photo is hysterical. Nando and I had a debate about whether it is even a real cat but I think it is! My friend has a cat that looks kind of like this one. 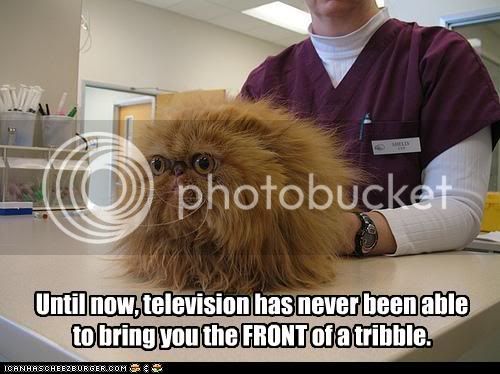 Ok, so this just BLEW MY MIND. When did the Back Street Boys come back?!?!?! They have a new album? I loved them back when I was like 12. So strange, especially the gothic lolita maids.

I feel like my apartment is finally furnished. Not that it wasn't furnished before but now all the rooms (all 3 of them!) have a significant amount of furniture. My aunt gave me her futon like couch and after a battle with cutting down the foam so the shrunken cover would fit it, it now looks marginally acceptable. On Black Friday Nando got a monitor and I got a mini laptop so those are now set up in the office too.

Besides that this week has been depressing with a lot of sad things happening that I don't really feel like talking about here.

I've put off looking into buy an apartment until January and at that time I'm going to look for a better Realtor. There are a lot of complications but I hope I'll be able to make it work sometime next year.

To end on a positive note I feel like I'm finally starting to understand my job. I have been able to process a lot of cases with minimal help. A far cry from where I was to begin with but I still have a long way to go until I fully understand everything.

So I managed to get tickets for Comic Con right before they sold out. It really annoys me that the con isn't until July and the 4-day badges are already sold out. Nando and I got badges but its more fun to go there with friends, and cheaper to stay in a room with friends but no one else got tickets. Hmmm, 1-day badges go on sale next month so I guess there is still hope. I really think they need to expand the convention, there are lots of Hotels in the area they could expand into to allow for people to go.

Cats woke me up at 6:30am because they don't understand the concept of Saturday :( MEH

So after a long vet visit and over $400 in medical testing, Winston (my cat) was finally diagnosed with Bronchitis (at least the vet is fairly sure that is what he has) and I have begun giving him medication. I'm trying to be optimistic this will help and he will finally get better. >^..^< Wish him luck :)

I'm worried about my cats, both seem a little sniffly and congested and sneezy. Winston has seemed this way for at least a few weeks. I took him to a local vet last week and the vet listened to his breathing for a bit and said he sounded fine and didn't do much. He sounds fine sometimes but congested at other times. I was disapointed with that vet and want to take them both somewhere else but I don't know any good local vets. I might just go back to the SF SPCA. I wish the vet wasn't so expensive, I'm worried I'm going to pay $100+ and they wont find anything wrong with them even though I know something is :(

Besides the usual going to work/hanging out with friends here are some of the things I've been up to lately.

I started playing Monopoly City Streets. The game is really addictive! Basically its like a game of Monopoly using the Google Maps World Map. You can buy streets using Monopoly money and the build building on them. You can also buy and sell streets with other players. You can buy pretty much any street in the world (though not in North Korea apparently.) When I was playing before I was buying up streets in El Cerrito. The game is restarting either today or tomorrow. I'll probably streets in El Cerrito again because there is less competition to buy them. If anyone else is playing it let me know! http://www.monopolycitystreets.com/

Another game I got yesterday which is awesome is Scribblenauts for the DS. I don't tend to use my DS very often but this game is awesome. Basically the game has a word pad and anything you write comes into the game. So you can write "vampire" and one will appear, or "scone" and one will appear. But you can write anything as long as it isn't copyrighted. Apparently the game recognizes tens of thousands of words and has images for each of them. You use the stuff you make appear to solve puzzles. For example there was one level that had garbage all over it and I typed "maid" and one appeared and picked up the garbage for me :)

I've also been into Gothic and Lolita fashion again, although I guess that isn't really new but I've been more into it since the New People World Mall opened in Japantown. I recently bought two BTSSB lucky packs and they are awesome. I need to actually wear this stuff more often instead of just thinking its awesome and putting it away in the closet. I do wear it occasionally, but only to events and cons for the most part.

I really want to go on a trip next month but I'm trying to stop myself since I went on three trips over the summer and haven't been able to save any money for a while now. Too bad because Southwest has really good deals for trips to Las Vegas and Orlando. It's basically buy one plane ticket get one free if you also book the Hotel through Southwest. I still really want to go to Japan but I don't think I can do it until late 2010 at the earliest since I'll have to save a lot of my vacation time to go to my cousin's wedding in June.

Anyway, I have 4 days off from Friday - Monday if anyone wants to do anything. So far I'm planning to go to the State Fair on Saturday but that's about all I have come up with so far.
Collapse